Roberts, May Have Slyly Handed Election To Romney 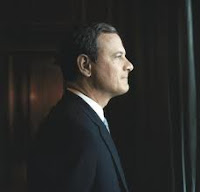 As you have no doubt heard by now, the Supreme Court largely upheld Obamacare with Chief Justice John Roberts writing the majority 5 to 4 decision. Even Justice Kennedy called for the whole law to be thrown out, but John Roberts saved it.


John Roberts is playing at a different game than just about everyone else. While most are viewing a poker hand. He’s playing chess.

Although we believe the concern is invalid, Roberts is concerned about keeping the Supreme Court above the partisan fray and damaging the Courts reputation


Roberts written opinion forces everyone to deal with the issue as a political, not a legal issue.


Roberts has expanded Congresses taxation power. By blocking the Commerce clause as an avenue for Congressional overreach, he has affirmed the Democrats are massive taxers.


Roberts opinion forces everyone to deal with the Health Care problem politically. Democrats are going to have a hard time running up to November claiming the American people need to vote for them to preserve Obamacare. The Law remains very unpopular with the American people. A vote for Health Care is now a vote for keeping a massive tax increase, we can not wait to see how that works out for them.


If they do not squander it Congressional Republicans have been handed an opportunity to try to shut down the individual mandate thereby Forcing Democrats on the record about the mandate.

60% of Americans still agree with Republicans on the issue. The Democrats will continue claiming that individual pieces of Obamacare are quite popular. With John Roberts’ opinion, the repeal fight takes place on GOP turf, not Democrat turf. The all or nothing repeal has always been better ground for the GOP and now John Roberts has forced everyone onto that ground.


It seems very, very clear to me in reviewing John Roberts’ decision that he is playing a much longer game, and can afford to with a life tenure. And he probably just handed Mitt Romney the White House. Read More Here
Missed Our 2011 Summer Fun Family Picnic?
Don’t Miss The Fun in 2012
Join Us For An Evening Of Summer Family Fun
July 19, 2012 6:00PM
Follow NJECPAC on Twitter,  Facebook, YouTube, LinkedIn
Explore More at NJECPAC
Posted by NJECPAC at 7:06 AM No comments:

Every NJ Electrical Contractor has an obligation to their industry and the survival of their own business to be members of the strongest Association(s) in the State.  A good place to start is with a NJECPAC member Association.

NJECPAC Member Associations are the leaders in New Jersey providing Education in Government & Regulatory Affairs, Credibility & Strength to NJ's Electrical Contractors. Strong Associations provide their members with the ability to protect themselves from unscrupulous union organizing activity, damaging Legislation, and Regulations, all of which can put them out of business before they know what happened.
Missed Our 2011 Summer Fun Family Picnic?
Don’t Miss The Fun in 2012
Join Us For An Evening Of Summer Family Fun
July 19, 2012 6:00PM
Follow NJECPAC on Twitter,  Facebook, YouTube, LinkedIn
Explore More at NJECPAC
Posted by NJECPAC at 5:00 AM No comments: