Our interest in this issue is more than just undocumented aliens entering this country illegally, it is the penalties that will be born by the employer.
The Judge let stand the employer penalty portion of the Arizona law which opens the door to prosecution of business owners for hiring illegal immigrants. But, An Employer who may very well have done their due diligence in verifying citizenship but was presented with false documents subjects themselves to criminal penalties if they hire that individual. How will law enforcement know if an employee is  here illegally if they are not allowed to ask them?
Keep in mind, what is in one state today is here in New Jersey tomorrow.
By blocking key provisions of Arizona's Immigration Law SB1070, Judge Susan Bolton has pushed our nation toward a radical expansion of the rights of illegal aliens and has given a green light to anyone that wants to cross our border illegally and do us harm by informing them that their presence here can not be challenged by local officials.
Bolton's ruling undermines the rights of every American citizen while leaving the states as pawns in a federal amnesty plan. In fact, Bolton's decision is a direct assault on every American and serves only to aid in the consolidation and centralizing of all power into the Obama Administration. It makes no difference who the President is, that is a bad precedent to set.
The National Review wrote: "If [Bolton's] reasoning stands, we will basically cut Congress out of immigration policy and the states out of enforcement. Instead, our immigration system will entirely depend on executive discretion at a time when the executive has little interest in enforcing the law.
The argument by some that it is the Federal Governments job to enforce Federal Law is ludicrous at best. that reasoning says that since bank robbery is a federal crime local law enforcement would could not arrest criminals that rob banks either.
This court case has now become a high-stakes legal battle between Obama and the American people. What happens in Arizona and with this case will dramatically impact every state in the nation. Arizona has appealed and has been granted an expedited appeal hearing in 24 days.
Read More
Posted by NJECPAC at 5:00 AM No comments:

Want To Train For A Green Jobs? Democrats Say No If Your Not A Union Member

If Obama was serious about creating jobs and especially training for Green Jobs he would have urged Congress to Pass H.R. 2026, The Green Job Improvement Act at his stop in Edison. He made no mention of the pending legislation because it appears that he does not support training everyone he was elected to represent, he and our NJ Democrat Congressmen only want to train their union base to ensure their continued support for reelection.
The Problem: The American Recovery and Reinvestment Act of 2009 included $500 million in funding for the Green Jobs Act but limits funding for green jobs training to organizations that partner with labor unions, thereby cutting out over 70 % of the workforce in the State of New Jersey.

So, to over 70% of the Workforce in New Jersey Obama and Our Democrat Congressmen say “We have nothing for you”.  Read More
Take Action
Posted by NJECPAC at 5:30 AM No comments:

The President, speaking at a sandwich shop in Edison, urged Congress to  pass legislation to help small businesses. "Small businesses are the backbone of our economy. They are central to our identity as a nation. They are going to lead this recovery," Obama said.
Democrats and Republicans have been trying to appeal to small-business owners, but the parties have different ideas about how best to serve them.
Read More

Click Here
Posted by NJECPAC at 5:00 AM No comments:

The so called DISCLOSE Act, backed by the President and narrowly passed by the House last month, was blocked in the Senate. The measure would have required CEOs and Business Groups, including Trade Organizations, to appear in ads they fund and require them to reveal their donors. 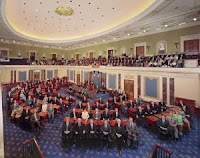 While sold as a means to crack down on the powers of special interest groups, it instead turned out to be a means to stifle traditional Republican supporters while placing virtually no restrictions on traditionally Democratic allies such as big money unions.
Senate Majority Leader Mitch McConnell, opposed the legislation, which he said purports to promote transparency but is "aimed at one thing and one thing only ... protecting incumbent Democrats from criticism ahead of November."  The measure would also have protected a number of incumbent Republicans.
The DISCLOSE ACT would directly effect groups such as The Coalition For A Democratic Workplace and other issue based groups to which many of our NJECPAC member Associations belong.
We applaud those Legislators that stood strong and opposed this flawed Legislation
Read More
Posted by NJECPAC at 5:00 AM No comments:

Any reasonable person paying just a little attention and applying common sense knows that there is an issue with Social Securities solvency moving into the future.  We also know that when any politician that publicly acknowledges the problem of SS underfunding and tries to fix it (example: President George Bush) the Democratic Party goes ballistic, and uses the issue for reelection rather than facing the problem and finding solutions to it.

House Speaker Nancy Pelosi said Saturday  that she is unequivocally opposed to raising the retirement age for Social Security, and that scaling back Social Security should not be a means of reducing the deficit.

"To change Social Security in order to balance the budget, they aren't the same thing in my view," the Democrat said today at the Netroots Nation conference in Las Vegas. "When you talk about reducing the deficit and Social Security, you're talking about apples and oranges."
Although we do agree with the Speaker that the answer is not raising the retirement age for our children, this is an issue that must be addressed. Speaker Pelosi's comments did nothing to address the problem nor did she offer any solutions, and instead, used the platform to kick off the election year politicizing of Social Security.
Read More
Posted by NJECPAC at 5:00 AM No comments: