Democrats Only Believe In Tax Cuts When Politicaly Expedient

97 Days to the Largest Tax Increase in American History
NJECPAC Board Members go to Washington every year to visit our NJ Congressional Delegation and our 2 NJ US Senators offices.
Since 2006 when the Democrat Party became the majority party, NJECPAC has been urging them to make the Bush Era Tax Rates Permanent to no avail.

For the last two years we have urged them to at least consider extending the tax rates due to the fragile state of the economy, again to no avail.
If you listen to the rhetoric now that it is an election year you hear them say that the Bush Tax rates will be extended for the middle class.
The truth is there is no legislation pending that would extend those tax rates introduced by any Democrat. The only Legislation introduced is the "Tax Hike Prevention Act" introduced by Republican Minority Leader Mitch McConnell that the Democrats are unwilling to consider
Lets do the math, 2006, 2007, 2008, 2009, 2010, =  5 years. That is how long the Democrats have been in the majority with the opportunity to extend or make permanent the Bush Tax Rates and they have failed to act. Now in an Election Year they are discussing it. Discussing it does not help the millions that are unemployed or the businesses that would employ them if they only knew what their tax rates will be going into 2011.
﻿﻿﻿Now Harry Reid has kicked the can down the road and will not consider extending the current tax rates until the lame duck session after the midterm elections. We don't know what he would have considered other than Senator McConnell's bill, since Democrats have not offered any other.

Who really cares about keeping the current tax rates for middle class? It is certainly not the leadership of the Democrat Party.
Read More
Posted by NJECPAC at 9:23 AM No comments: 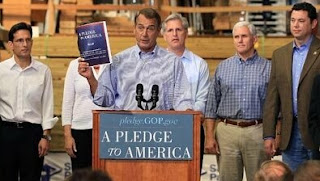 Democrats can no longer continue their inherently false claims that the GOP has no ideas. They will be limited to a futile attempt to convince voters that by implementing GOP ideas to get our fiscal house in order and put millions of Americans back to work are somehow bad for America.

The voters will have their opportunity to answer that question themselves on November 2nd, after which the Democrat Party may have no other choice than to consider what are basic, viable, common sense ideas that will undoubtedly steer our Country back to Economic Prosperity.
Read The Pledge To America

Watch Video
Posted by NJECPAC at 5:00 AM No comments:

Email ThisBlogThis!Share to TwitterShare to FacebookShare to Pinterest
Labels: HR 3590, Pledge To America

Obama: 'We can absorb a terrorist attack'

Obama repeatedly pressing his top military advisers for an exit plan that they never gave him he urgently looked for a way out of the war in Afghanistan last year.
Frustrated with his military commanders for consistently offering only options that required significantly more troops to win the war, Obama finally crafted his own strategy, dictating a classified six-page "terms sheet" that sought to limit U.S. involvement, journalist Bob Woodward reports in his "Obama's Wars," to be released Monday.
As if our Military is playing in a football game Obama is quoted as telling White House Aids "This needs to be a plan about how we're going to hand it off and get out of Afghanistan,"

The White House is barraged by warnings about the threat of terrorist attacks on U.S. soil and confronted with the difficulty in preventing them. During an interview with Woodward in July, the president said, "We can absorb a terrorist attack. We'll do everything we can to prevent it, but even a 9/11, even the biggest attack ever . . . we absorbed it and we are stronger."

This from a President that only uses the word WIN when refering to an election, and never when it comes to a wars that our brave men and women in the Military fighting and dying in.
Showing his obvious inexperience, he fails to consider that it is the fragile state of the economy and not the american people will be unable to absorb any kind of terrorist attack. the Markets would likely crash as bad or worse then they did immediately following the attack on 9-11. Does anyone believe that we can absurb that at this juncture?
Read More
Posted by NJECPAC at 7:18 AM No comments:

The Senate just failed by a count of 56-43 to approve cloture for the DREAM Act, which would have allowed debate to begin on a Defense bill that Senate leaders hoped would include the DREAM Act amnesty or more appropriately put the Hand Out For Votes Act.

Because it takes 60 votes for cloture, the Defense bill had to be pulled. It is unfortunate and disgraceful that Harry Reid attempted to use a funding bill for our troops to slip through Amnesty for Illegal Aliens.

The incompetent act of Senate Majority Leader Reid in using the Defense bill as a vehicle for the amnesty was the reason why Republicans refused to allow debate on the bill.

Every Republican (except Sen. Murkowski of Alaska who was absent) voted NO.
Republicans will be demonized they will be called the Party of No and it will be said that they don't care about the troops but the truth of the matter is the Dream Act has no place in a Defence Appropriations Bill. In this case the Party of No lived up to their reputation of voting no to BAD Legislation

Sen. Pryor and Sen. Lincoln of Arkansas were the only Democrats that voted NO to Harry Reids scheme to hold Troop funding hostage in a scheme to garner himself much needed votes for his own reelection.

We do not believe that every Democrat voting YES to start debate would support the DREAM amnesty Act if it was to come to a vote. We know that on a direct up or down on the amnesty, many Democrats would have voted NO. But this opening cloture vote was a window through which to see which Democrats remain minions of Harry Reid and which Democrats are willing to stand up for the will of their constituents.
Posted by NJECPAC at 6:20 AM No comments:

Take Our Poll On Extending The Bush Era Tax Rates

NJECPAC Supports Making The Bush Era Tax Rates Permanant﻿﻿
﻿﻿
NJECPAC Board Members meet with our NJ Congressional Delegation and 2 US Senators in Washington each year and make our case to extend the Bush Tax rates permanantly.
What Do You Think?
Click Here
Posted by NJECPAC at 5:00 AM No comments:

The Wall Street Journal
As Big Labor has realized it won't get "card check" legislation through Congress, it is turning to its secret weapon inside the Obama Administration—labor lawyer Craig Becker. And as many Senators feared when he was nominated, Mr. Becker is using his position on the National Labor Relations Board to bypass the will of Congress.
President Obama gave Mr. Becker a recess appointment in March after Senate Democrats refused to confirm him to the NLRB, the agency charged with fairly overseeing union elections. As a top lawyer for the Service Employees International Union, Mr. Becker had suggested that the NLRB has the legal authority to impose card check—which eliminates secret ballots in union elections—without the approval of Congress.
Posted by NJECPAC at 5:00 AM No comments:

Amendments to the White House small business bill that would rescind an ObamaCare mandate that companies track and submit to the IRS all business-to-business transactions over $600 annually failed to invoke cloture 58-42, with Senator Reid voting against it.

Democrats tucked the 1099 reporting footnote into the bill to raise an estimated $17.1 billion, part of the effort to claim that ObamaCare reduces the deficit by $100 billion or so.
Small businesses are staring in horror toward 2013, when the 1099 mandate will hit more than 30 million of them. Currently businesses only have to tell the IRS the value of services they purchase from vendors and the like. Under the new rules, they'll have to report the value of goods and merchandise they purchase as well, adding vast accounting and paperwork costs.
Most Democrats now claim they were blindsided and didn't understand the implications of the 1099 provision—which is typical of the haphazard, destructive way the bill was written and passed. As we have reported here and found when we visited Washington in May, most Members had no idea what they were voting on. Some 239 House Democrats voted to dump the 1099 provision in August, and the repeal would have passed except Speaker Pelosi rigged the vote procedurally so it needed a two-thirds majority. She thus gave Democrats the cover of a repeal vote without actually repealing it.
The larger picture reveals that ObamaCare is already under bipartisan siege, and in the same Congress that passed it. The 1099 provision is only one piece, but repealing the law piece by piece may be the right strategy. Sooner or later the whole thing becomes unworkable.
This failed vote reveals clearly who's really on the side of small business.
Read More
Posted by NJECPAC at 5:00 AM No comments:

Email ThisBlogThis!Share to TwitterShare to FacebookShare to Pinterest
Labels: 1099, HR 3590

While remaking America, Obama might find inspiration from some of his favorite quotations inscribed on a new rug in the Oval Office. Abraham Lincoln, Theodore Roosevelt, Franklin Roosevelt, John F. Kennedy and the Rev. Martin Luther King Jr. Only it turns out – after the rug has already be sewn and laid down – that the quote attributed to Martin Luther King Jr. was not an original King quote.
Obama's favorite quote, "The arc of the moral universe is long, but it bends toward justice." is attributed to King.  ﻿The words actually orgiginated from Theodore Parker whose roots in the republic ran so deep that his grandfather commanded the Minutemen at the Battle of Lexington.
Another familiar quote from Lincoln woven into Obama's rug is "government of the people, by the people and for the people," the well-known utterance from the close of his Gettysburg Address in 1863.
Funny that in 1850, Parker wrote, "A democracy -- that is a government of all the people, by all the people, for all the people."
Theodore Parker, Oval Office wordmeister for the ages.
Read More
Theodore Parker Theodore Parker (August 24, 1810-May 10, 1860) was a preacher, lecturer, and writer, a public intellectual, and a religious and social reformer.
Posted by NJECPAC at 8:11 AM No comments: