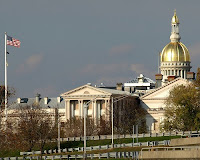 New Jersey’s Unemployment Insurance (UI) fund is insolvent. If nothing is done by July 1, employers across the State will get hit with a $1 billion payroll tax increase requiring them to pay an average additional tax of $400 per employee, with some paying as much as $1,000 or more.
Governor Chris Christie has conditionally vetoed legislation to address the problem. It is critically important that the Legislature act now to uphold Christie’s conditional veto, which will limit the increase to $130 per employee this year instead of $400 per employee.
The NJBIA has provided a link to write your legislator to tell them to uphold the Governors Conditional Veto and send the amended Bill back to the Governor for his signature.
To Take Action Go to NJBIA Grassroots Action Center
Posted by NJECPAC at 5:00 AM No comments:

Secretary of Labor Hilda Solis recorded a Department of Labor video encouraging Employees “Including Illegal Aliens” to turn in their employers if they do not believe they are being paid enough.
We had no idea that the Secretary of Labor was appointed to be the Equal Pay Police. The sheer volume of calls this self serving video will generate could be staggering.
The video, which encourages employees to file complaints against their employers if they don’t think they are being paid enough, will cost employers millions of dollars in legal fees to defend themselves from a myriad of frivolous cases.

“Did the President Approve Her Message?”
Based upon the pro union labor stance the President has taken since he took office and his recess appointment of radical union labor attorney Craig Becker to the NLRB, and his refusal to secure our borders, we are sure he has.
To view the video click here
Posted by NJECPAC at 5:00 AM No comments:

A Bill Intoduced in the Assembly will force Employers to pay employees for Jury Duty.
A-2818 amends the current law concerning employment protection for jury service. This law specifically prohibits an employer from penalizing an employee who misses work because of jury duty. This bill would clarify that an employer is required to pay an employee his usual compensation for each day that person is present for jury service, less the amount per diem fee for each day of jury service as shown on a statement issued to the juror by the court officer who is making the payment of juror fees.
To read the full text of A-2818 Click Here
Posted by NJECPAC at 5:00 AM No comments:

Rounding of Employee's time for the purpose of record keeping and determining wage payments, including overtime, will soon be permitted under New Jersey Law, according to the New Jersey Department of Labor.
Previously, the NJDOL had taken differing positions (depending on who you talk to) as to whether or not rounding of hours is permitted under State Wage & Hour law, as it is under the Federal Fair Labor Standards Act,  29 c.f.r. 785.48 (b))
The NJDOL is now in the process of drafting regulations to adopt the Federal rounding standard.
Once adopted, the Ruling can be important if applied to Prevailing Wage Projects, particularly where a time clock or other electronic time recording device is utilized to track an employees time worked.
Posted by NJECPAC at 5:00 AM No comments:

Bill Introduced to Prohibit Credit Checks As Condition Of Employment

Senate Bill 1922 would prohibit an employer from requiring a credit check from a current or prospective employee as a condition of employment unless the employer is required to do so by law or reasonably believes that an employee has engaged in specific activity that is financial in nature and constitutes a violation of law.
A similar Bill S-1791 has also been introduced
To view the full text of the Bill click on the Bill number you would like to view S-1922, S-1791,
Posted by NJECPAC at 5:00 AM No comments:

Senate Bill 1968 would amend the current law concerning employment claim procedures to address abuses occurring in the UI system that often result in the delay or denial of benefits to laid off workers.
Among the changes sought are a waiver from repayment of claim overpayment's to faultless claimants. increase the amount of time for both employers and claimants to appeal claim determinations from 7 to 20 days and provide a detailed mechanism for the registration and regulation of authorized agents representing employers in UI claims.
To read the full text of S-1968 Click Here
For Bill Statement and Amendments to S-1968 Click Here
Posted by NJECPAC at 5:00 AM No comments: 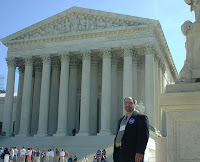 The US Supreme Court Rules that a 2-Member Board Lacked Authority to Make Rulings
On June 17, 2010 the US Supreme Court ruled that the National Labor Relations Board (NLRB) was not authorized to act during the 27-month period after December 2007 when the Board had only two of its five members.
The Supreme Court held, 5 to 4, that Section 3(b) of the NLRA requires that, when the Board delegates its authority to a three-member group, that delegee group must maintain a membership of three in order for the delegation to remain valid and allow the exercise of the delegated authority.
During the 27 month period of the two-member Board, it issued nearly 600 decisions. Over 70 of those decisions were challenged in federal appellate courts on the basis that the Board did not have authority to act.
For the full text of the Supreme Court Decision Click Here
Posted by NJECPAC at 5:00 AM No comments: