On Monday, April 30th, Barack Obama’s union-controlled National Labor Relations Board will be imposing its new union election rules, designed to ambush employers. Unions won over 71% of the 1595 NLRB-conducted elections in 2011 which makes one wonder why this rule is even warranted and is certainly unnecessary. 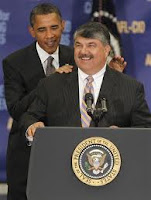 Given unions’ legal ability to deceive workers into unionizing, NLRB’s new rule amounts to nothing less than a Government Agency doing big Labors bidding. The increased union organizing activity that is expected to follow will result in smaller companies and their employees being victimized by unscrupulous union organizers.  Read More

Note: This is a different issue from the NLRB Poster Requirement which originally was also to take effect April 30 but has been postponed indefinitely.

In addition, last week IEC members from across the Country converged on Capitol Hill for the IEC Legislative Fly-In and urged support for a resolution in the U.S. Senate that would have blocked the rule. The resolution failed on a 54-45 party-line vote.