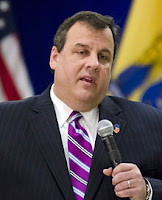 The Truth is that Democrats led by Senate President Steve Sweeney soundly rejected Governor Christie's plan for a flat 3% Cap that contained no loopholes. They then substituted their own 2% cap with various loopholes for Schools and Municipalities that they ultimately passed and sent to the Governor

Of course the Governor did sign the bill, so his name is indeed on it. We believe the Governor signed the slightly flawed Bill because he believed that if he did not compromise there would have been no Property Tax Relief at all.


Now some are claiming the cap is an egregious failure. For purely political reasons those that are making that claim think the electorate will believe that it is all Chris Christie's Fault........


Although not perfect, what was passed was a compromise between the Governor and the States Democrats which gave some property tax relief, There is still room for more work to be done by both Parties to help Municipalities manage their affairs and provide services to Property tax payers including Small Businesses without raising taxes by eliminating waste that still exists around every corner.
Follow NJECPAC on Twitter,  Facebook, YouTube, LinkedIn
Explore More at NJECPAC
Posted by NJECPAC at 6:21 AM No comments: