The "Race to the Top" controversy would never have arisen, if eighth district Republican congressional candidate Roland Straten's position was policy.
"The system is broken," comments Straten. "The federal government takes billions from the State and then makes the State plead for some of it back by requiring a 1,000 page application for Race to the Top funding.”
Straten's point is that the federal government is spending too much and is much too intrusive into the States' operations and prerogatives. The State of New Jersey should decide how to spend its money rather than sending it to Washington and have Washington to decide whether or not New Jersey can have it back.
"The money to fund the grant should never have left New Jersey in the first place," Straten emphasizes. "The federal government taxes us, and then requires us to contend for our own money!"
A fiscal conservative, Straten believes that the federal debt and deficit are the most significant domestic threat to the nation. He notes that the federal government has to borrow from the future to fund such programs and the departments that administer them.
Read Full Press Release
Posted by NJECPAC at 5:00 AM No comments:

Speaking to a crowd of union employees at Laborfest in Milwaukee, the president offered a six-year, front-loaded plan to rebuild 150,000 miles of our roads, lay 4,000 miles of railways and restore 150 miles of airport runways. 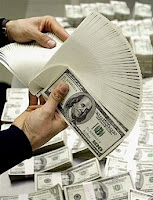 The proposal also calls for a strategy to build a national high-speed rail network and create an "infrastructure bank" that uses competitive measures to determine which projects receive funding rather than earmarks and grants.
The president said the project will be paid for -- assuming congressional support -- with tax hikes on oil and gas companies and will cut waste and bureaucracy by consolidating more than 100 duplicative programs.
Read More


His plan to spend another $50 billion to help small business is viewed with scepticism. Just as in the Green Jobs Act, watch for regulations that that will require the money to be tied to union only jobs and projects, which will leave 80% of small construction companies out in the cold.

The President while looking unpresidential with no jacket and no tie and his shirt sleeves rolled up, also used the opportunity to bash Republicans as the party of no which is in fact half correct. Republicans have become the party of no, No to Bad Legislation, Bad Policies, and Careless Spending, which we view as a good thing.

The truth is, their efforts are protecting taxpayers from the careless spending that continues to come from Washington, with no real effect on the economy. Careless spending coming out of this administrations failed attempts at jump starting the economy has resulted in a devastating effect on the countries debt for generations to come.
Posted by NJECPAC at 5:00 AM No comments:

More Dems Come Out Against Tax Hikes On The Rich

Congress seems increasingly reluctant to let taxes go up, even on wealthier Americans.
Worried about the fragile economy and their own upcoming elections, a growing number of Democrats are joining the rock-solid Republican opposition to President Barack Obama's plans to let some of the Bush administration's tax cuts expire.
Democratic leaders in Congress still back Obama, but the willingness to raise taxes is waning among the rank and file as the stagnant economy threatens the party's majority in the House and Senate.
"In my view this is no time to do anything that could be jarring to a fragile recovery," said Rep. Gerry Connolly of Virginia, a first-term Democrat.
Read More

Talk is cheap, expecially before an election. Currently, no one has introduced legislation to extend or make permanant (which is our preference), the Bush Tax cuts. Without legislation, we are still in for the largest tax increase in American History.

To mark Labor Day 2010, President Obama will join hands with AFL-CIO President Richard Trumka in Milwaukee and pose as champions of the working class. Bad move. Trumka's organizing record is a shameful reminder of the union movement's violent and corrupt foundations.
The new Obama/AFL-CIO power alliance -- underwritten with $40 million in hard-earned worker dues -- is a midterm shotgun marriage of Beltway brass knuckles and Big Labor brawn.
Trumka and Obama will cast Big Labor as an unassailable force for good in American history. But when it comes to terrorizing workers, Trumka knows whereof he speaks.
Meet Eddie York. He was a workingman whose story will never scroll across Obama's teleprompter. A Merit Shop Contractor who operated heavy equipment, York was shot to death during a strike called by the United Mine Workers 17 years ago. Workmates who tried to come to his rescue were beaten in an ensuing melee.
The head of the UMW spearheading the wave of strikes at that time? Richard Trumka.
He not only condoned the cold blooded murder his legal team quickly settled a $27 million wrongful death suit filed by York's widow just days after a judge admitted evidence in the criminal trial.
This is the guy that our President will disgracefully be kowtowing to over this labor day weekend.
Read More by Michelle Malkin
Posted by NJECPAC at 5:00 AM No comments: