﻿We have a nonpartisan, sterile, unflappable Congressional Budget Office virtually predicting a "fiscal crisis," yet the Democratic Senate continues to ignore their responsibility to pass a budget for over 2 years, 785 days to be exact. Where is the accountability? Where is the public outrage?
﻿
﻿

The media is supposed to police political incompetence for the public, yet very little is reported in the mainstream media about the looming financial crisis we are living under.
The only news organization talking about the issue responsibly is Fox News. Frankly, if it was not for Fox News we would be living under a truly stealth Govement.   ﻿﻿﻿﻿﻿﻿﻿﻿
﻿﻿﻿﻿

﻿﻿﻿﻿At what point do the large majority of Americans begin to care about the Country going Bankrupt? How can people be so oblivious to what is going on around them?
It seems that people only jump up and down and object after the damage is done, and even then only when the damage directly effects them, to hell with their family and neighbors. ﻿﻿
Only when the masses wake up from their politically zombie existance will this change. Only then will we truely have government for the people and by the people.
Read More

Texas Once Again Stands In The Forefront By Speaking Up For American Ideals.
During committee testimony this week in Austin, a Texas senator interrupted a Spanish speaker and telling him he should “be speaking in English” during a committee hearing.
Antolin Aguirre of the Austin Immigrant Rights Coalition was testifying against Senate Bill 9 that would help crack down on illegal immigrants in Texas. Aguirre spoke through an interpreter even though he had been in the U.S. since 1988.
Two minutes into Antolin Aguirre’s testimony, Sen. Chris Harris, a Republican from Arlington, interrupted asking Aguirre’s interrupter, “Did I understand him correctly that he has been here since 1988?” Harris asked. “Why aren’t you speaking in English then?”
Through his interpreter, Aguirre said Spanish is his “first language and since it is his first time giving testimony he would rather do it in Spanish.”
“It is insulting to us,” Sen. Harris fired back. “It is very insulting. And if he knows English, he needs to be speaking in English.” Read More
Follow NJECPAC on Twitter,  Facebook, YouTube, LinkedIn
Explore More at NJECPAC
Posted by NJECPAC at 5:00 AM No comments:

Email ThisBlogThis!Share to TwitterShare to FacebookShare to Pinterest
Labels: Immigration 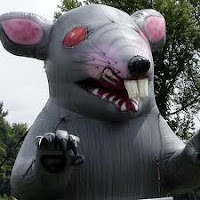 Activist NLRB Sanctions Use of Inflatable Rats Against Secondary Employers
The National Labor Relations Board (NLRB or Board) recently ruled that a union's display of a large inflatable rat balloon at a secondary employer's premises in order to protest the labor practices of its nonunion contractor is not coercive and does not violate U.S. labor law.
Read More


To set the record straight; To a union, the inflatable rat is intended to send a distasteful message to the public about the company that the union is targeting. Based upon the three most important factors consumers look for when hiring a contractor, R-A-T stands for Reliable - Affordable - Trustworthy.
Another term commonly used by unions refering to workers that choose not to belong to a union is scab. As anyone knows a scab is a sign of healing. In the case of a labor dispute, the scab serves to heal the wounds bought upon a company by a union job action.
Posted by NJECPAC at 5:00 AM No comments: