Can Scandals Lead To Obama's Downfall? 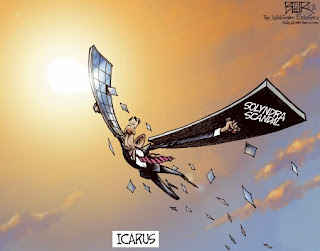 It is amazing the silence from the Main Stream Media concerning 'Obama's Solyndra Scandal' not to mention the runners up, two more green energy companies and two other companies that also got fast tracked stimulus money and are bankrupt.
It has now come out  via leaked emails that the White House knew that Solyndra would run out of the taxpayers money that the Administration loaned them by September of 2011. Predicting correctly when a company that the Administration loaned half a billion dollars of taxpayer money would burn through that money is not exactly something they can hang their hats on.

A former Solyndra employee went on air essentially blowing the whistle on the whole deal. This is what she had to say: “While we were out there, while we were building it – cause it is a half a billion dollar plant – everyone already knew that China had developed a more inexpensive way to manufacture these solar panels. Everyone knew that the plant wouldn't work. But they still did it. They still built it. ” She then emphasized that she isn't even that high on the totem pole and she knew this stuff. So there’s no doubt in her mind that Obama and the White House knew that it wasn't feasible.

Is the Administration worried about the loss of half a billion dollars of Taxpayer money? Apparently not, in a leaked email a White House Official makes it clear that they are more worried about how the scandal will effect Obama's reelection bid in 2012.
The FBI raid on Solyndra and the seizure of their records can only be seen as a crack in the Obama administration’s stranglehold on government agencies. The silence from Attorney General Eric Holder if deafening.

And lets not forget 'Operation Fast And Furious' that placed guns in the hands of members of a drug cartel in Mexico resulting in the death of US border agents. More
Mexican Lawmakers are also livid over Obama Administration's 'Operation Fast & Furious More
Imagine the relentless badgering and calls for his resignation from the so called Main Stream Media and virtually every Democrat including Obama if it was George W. Bush that was responsible for any one of these things let alone all of them.

"I'm mad as hell," South Carolina Republican Sen. Lindsey Graham told reporters on Capital Hill on Wednesday.
A day ahead of a House vote on a bill stopping the National Labor Relations Board from blocking Boeing's plan to open a new production facility in South Carolina, a group of Republican senators blasted the NLRB for being a rogue agency.
"This is a frivolous complaint beyond imagination,” Graham said. “This is using the law for political purposes, and I really do resent that the idea that we are not going to fight back. Sen. Reid, help us out here."
Senate Majority Leader Harry Reid has given no indication he intends to take up a companion bill in the Senate.  Read More
Follow NJECPAC on
Twitter,  Facebook, YouTube, LinkedIn
Explore More at NJECPAC
Posted by NJECPAC at 6:41 AM No comments: