Some Small Businesses May Benefit From Health Credits On 2010 Taxes

Most of the health care reforms Obama signed into law last month won't take effect for another four years. But some small businesses can look forward to some relief in 2010.
The Internal Revenue Service is notifing small-business owners of a tax credit for health insurance premiums that is included in the health care law and applicable to the 2010 tax year. To qualify, a business must employ fewer than 25 full-time workers at less than $50,000 per year and pay for at least 50% of the cost of their health insurance premiums. Read More
Posted by NJECPAC at 5:00 AM No comments:

The Following is a brief summary of how the key provisions in these two bills will impact member companies and their employees.
H.R. 3590, commonly known as the Health Care Reform bill, was signed into law by President Obama on March 23, 2010.
H.R. 4872, commonly referred to as the “reconciliation package,” included modifications to H.R. 3590 and was passed by both the House and Senate on March 25. On March 30, President Obama signed H.R. 4872 into law.
Merkley Amendment
The Merkley Amendment provision that reduced the employer mandate from 50 or fewer employee to 5 or fewer employees for the Construction Industry was removed from the health care bill, which means all employers in all industries that employ 50 or fewer employees will not be subject to the employer mandates included in the bill.
In exchange for supporting the bill, the unions reportedly have been guaranteed an up or down vote on the Merkley amendment at an unspecified later date. Approval of the Amendment would reduce the insurance mandade for Construction Companies to 5 or fewer employees. The Government Affairs Committee's of every Merit Shop Trade Organization will be looking out for that provision to surface and will work to defeat it.
Effective 2010
Insurance Carrier Market Reforms
Eliminates pre-existing condition exclusions for children.
Bans lifetime and annual coverage limits as determined by the Department of Health and Human Services.
Extends eligible dependent coverage to age 26.
Requires new private plans to fully cover preventive care services (no co-payments).
Small Business Tax Credit (First Phase)
Provides Tax Credit to small employers that purchase health insurance for their employees (25 or fewer full-time employees and annual average wages of $50,000 or less).

Members of Congress must register into a health care exchanges. The problem is health care exchanges dont exist yet. That means that Congress is already breaking their own law.....obviously they did not know what they were doing to themselves.....so how could they possibly have any idea what they did to us.
Posted by NJECPAC at 5:00 AM No comments:

Economic Stimulus ~ It's ALL Your Money 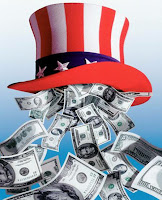 Topic: Economic Stimulus
Total Allocated Cost: $862,000,000,000
It seems fitting that on April 15th, "Tax Day",  we make a tax calculator available for our subscribers to calculate their share of the tax burden created by the Obama Administrations economic stimulus plan. The very administration that claimed then and still claims now that there would be no tax increase on middle class Americans.
In February 2009, President Obama signed the American Recovery and Reinvestment Act of 2009. In early 2009, the Congressional Budget Office estimated that the Recovery Act's combined spending and tax provisions would cost $787 billion. In early 2010, CBO updated its estimate of the cost of the Recovery Act. It now estimates that the Recovery Act will cost $75 billion more than originally estimated - CBO now anticipates that the 2009 Stimulus will increase deficits by $862 billion over ten years.
Go To Tax Calculator
Posted by NJECPAC at 12:30 AM No comments:

New Jersey's public employee labor unions, long seen as a potent political force and often depicted as an 800-pound gorilla looming over the Statehouse, are running short of friends in Trenton. Gone is Gov. Jon S. Corzine, who regularly sided with unions. In his place stands Gov. Christie, who has sharply criticized labor's influence, union leadership, and benefits.
In an article from the Philadelphia Inquirer, light is shed on what the effect of the backlash we are seeing against exorbitant benefit and pensions for public workers is having on public union leaders.

Meanwhile, Private Construction unions are still basking in the sun. They continue to be rewarded for their support of the Democrat party with the expansion of Project Labor Agreements and mandated prevailing wages that are now extended to select private construction projects. The effects of these hand outs and discriminatory practices in favor of unions remain a detriment to our NJ economy rebounding swiftly.

It is important to note that it is the leaders of the public unions that are blocking real reform and not the majority of the public employees themselves. Union leaders lack the vision necessary to participate in moving NJ into the 21st Century. They prefer the status quo and would rather continue their stone age existance as the dinosaur in the room. There are a myriad of ways to rein in costs with little pain or detriment to public employees but the union leaders fearing a loss of power over their members reject anything that will help reduce costs to the taxpayer.

As the late great Ronald Reagan once said "The Status Quo is Latin for the mess we are in"
Read More
Posted by NJECPAC at 7:14 AM No comments:


Many Organizations have commented on the PLA rules as they were being formulated and again after a draft of the rules was released.....Members of the NJECPAC have been a party to formal responses and input to the White House on th PLA Rules which, Due to Obama being beholden to the unions, all of the comments concerning the rules fell on deaf ears.
Posted by NJECPAC at 6:58 AM No comments:

No Money For Obama's Jobs Agenda 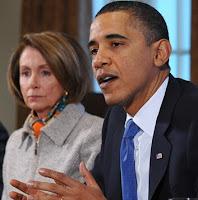 The Election-Year Jobs Program promised by President Barack Obama and the Democrat majority has stalled seven months before voters determine control of Congress.
The Problem, Democrats have no money to pay for the program.

Both the Democrat Chairman of the Senate Budget Committee and Republicans object to taking money left over from the TARP fund that bailed out banks, automakers and insurers and using it for the jobs bill.
Using the left over money from the fund would add tens of billions of dollars to the rapidly growing $12.8 trillion national debt.
Read More
Posted by NJECPAC at 7:46 AM No comments: