Bill Will Help Promote Growth of Alternative Energy Production in New Jersey.
Senate Bill S921 sponsored by Senator Jennifer Beck (R-12) that will make it easier for both homeowners and businesses to install clean-energy producing solar panels was signed into law by Governor Chris Christie.
“Most people don’t realize that New Jersey is one of the largest and fastest growing solar energy producers in the country,” said Beck. “While there is a growing demand from homeowners, farmers and the business community to install solar panels on their properties, many have found a patchwork of conflicting laws and regulations that have prevented clean energy installations. This legislation removes a major obstacle that has prevented our state’s growth in solar energy.”
Read More
Posted by NJECPAC at 1:30 PM No comments:

Misclassifying Employees as Independent Contractors Can Be Costly

Over the years, companies have developed alternative working arrangements with their workers. One such arrangement is Independent Contractor. Independent Contractors are not covered by company benefit plans, and payroll withholdings and deductions do not apply. They are not entitled to statutory benefits and protections afforded to traditional employees, such as unemployment compensation and workers’ compensation.
Misclassifying individuals as Independent Contractors can result in many forms of liability. Stepped-up enforcement actions by the IRS and the federal government will likely increase the risks of misclassification.
Now the Obama Administration is weighing in on the misclassification of employees. Obama’s 2011 budget includes funds to start a joint initiative between the Department of Labor and the Department of the Treasury to eliminate legal incentives for employers to misclassify their employees.
Read More
Posted by NJECPAC at 5:00 AM No comments:

US Dept of Labor Increases Enforcement With We Can Help Campaign 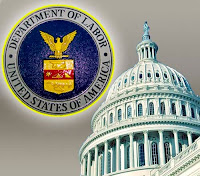 On April 1, 2010, the U.S. Department of Labor (DOL) delivered on its promise to focus its resources on enforcement efforts, launching a new public awareness campaign called "We Can Help".
The campaign is designed to educate workers about their rights under the federal Fair Labor Standards Act (FLSA), but its implications are more significant and far-reaching. According to the DOL's Web site, the Wage and Hour Division is targeting workers' rights and pay issues—and it is doing so regardless of their immigration status,
The Webs site directs workers how to file a complaint with the Wage and Hour Division, and it encourages them to provide information to the Division, including copies of pay stubs, hours of work and any information related to the employer's pay practices.
Read More
Posted by NJECPAC at 12:26 AM No comments:

Email ThisBlogThis!Share to TwitterShare to FacebookShare to Pinterest
Labels: Department of Labor, Labor

The rule applies to all Solar Photovoltaic Array Modular Panels that emit a voltage greater than ten volts when subjected to natural or artificial light.

Please take our Poll contained within this Blog concerning this topic
Your input is important to us.

For Board Ruling Click Here
Click Here for Board Meeting Minutes
Posted by NJECPAC at 12:30 AM No comments: