Doing What Needs To Be Done 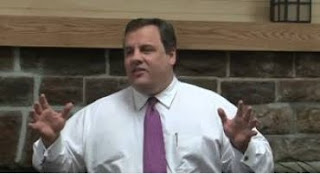 By Chris Christie
This is going to be a budget that is going to be unlike any other you’ve probably seen in NJ in at least the last 20 years and maybe longer.

Expenses at the local level, the school board or the municipal level, in the county level to some extent have continued over that period of years to rise.

So now we are confronted with a situation where we have an economic recession, where NJ has been disproportionately affected by that recession because of our enormously high taxes. So people are not only going out of business because of the recession, those who are staying in business many of them are leaving the state, to go to places like right across the river here in Pennsylvania, where the top income tax rate is 3%, rather than, nearly 11% under Gov. Corzine and now because the lapsing of one tax about 9% as our top rate.

To Read More Click Here
Posted by NJECPAC at 2:06 PM No comments:

A company backed by Microsoft founder Bill Gates and Toshiba are in early talks to jointly develop a small nuclear reactor. Gates will team up with Toshiba to develop a compact next-generation reactor that can operate for up to 100 years without refueling to provide emission-free energy.
Read More
Posted by NJECPAC at 8:35 AM No comments:

Health Care Bill Vote Passes 219-216 and No Republicans on Board. The historical health care bill passed the House of Representatives tonight. The bill is the same bill that the Senate passed on Christmas Eve.

The final vote count was 219-216, with no Republicans on board. The passage was completed even though angry citizens launched angry protests on Capital Hill this weekend.

Even though there are Americans that are for the legislation, there are many that are against it. Political analysts estimate that many Democrats will lose their jobs come the 2010 midterm elections.

Read More
Posted by NJECPAC at 8:45 AM No comments:

Organizations and lawmakers opposed to the health care reform package are already lining up to file constitutional challenges to the sweeping Health Care Overhaul. The health care bill passed by only a Three Vote Margin and was signed by the President.

Two key issues seem to be attracting the bulk of the legal threats: a mandate for individuals to purchase health insurance and the special treatment that some states Nebraska and others are getting as a pay off merely for voting for it.

On the first issue, Sen. John Ensign, R-Nev., on renewed the call to examine the constitutionality of whether the federal government can require Americans to purchase a product.

"I don't believe Congress has the legal or moral authority to force this mandate on its citizens," Ensign said in a statement, raising what's known as a "constitutional point of order."

The non-profit Fund for Personal Liberty, as well as a Virginia-based group called the 10th Amendment Foundation, threatened to file suit in federal court over this issue once the health care bill is passed.

The Constitution allows Congress to tax, borrow, spend, declare war, raise an army and regulate commerce, among other things. Proponents of the insurance mandate point to the Commerce Clause in arguing that Congress is within its rights to require health insurance and dismiss such potential legal challenges.

"I personally do not believe the Congress has the authority to enact an individual mandate requiring a person to purchase a product from a private seller," said Kent Masterson Brown, lead counsel with The Fund for Personal Liberty. "I don't think the power is there. This is not regulating anything."

He said his group would be joined by the Washington Legal Foundation in filing suit against the health care bill.

As long as there is a Mandate affecting our freedom, Constitutional legal challenges will continue to loom.
Posted by NJECPAC at 8:03 AM No comments:

Declaring “I support health care reform. I just do not support Nancy Pelosi’s version of health care reform,” Rep. Rodney Frelinghuysen voted “no” on both the Senate-passed health care bill (H.R. 3590) and the “reconciliation” package (H.R. 4872) designed to “fix” flaws in H.R. 3590.

In remarks on the House floor, Frelinghuysen declared “When it comes to controlling health costs for New Jersey’s families, changing objectionable insurance company practices and making coverage available to more Americans, the status quo is simply unacceptable. We can, and we must, do better, but not at the expense of millions of American families worried about a government takeover of their health care!”

Frelinghuysen cited many provisions in both bills that he strongly opposed: For more on the Tax Increases, Individual Mandates, Higher Taxes, FICA Tax Expansion, and just some of the many Omissions this Health Care Bill
Click Here
Posted by NJECPAC at 7:46 AM No comments: